Play Online: The Impossible Quiz Book: Chapter 3
Developer: Splapp-Me-Do
Genre: Puzzle
The Impossible Quiz Book: Chapter 3 Guide
Solutions to The Impossible Quiz Book: Chapter 3
Note: Answers written in red indicate that the question features a bomb. The bolded red text next to it indicates the timer of the bomb. If the number is 'in quotes', then the bomb won't cause a game over upon time running out. If the number has an ellipsis (...) before it, the bomb will appear if you take too long in a question.
101. Before Christ (TOO OBVIOUSLY!)
102. The upper right block (The hieroglyphs somewhat translate as the word water, and the upper right block looks like a stream of water)
103. Dinosaur in a top hat!
104. 2002 (the year the Ice Age movie was released)
105. Four (the holes in 'TROLOLOL'; reference to Questions 1 and 100 from TIQ, as well as Question 30 from TIQ 2)
106. Kick it up the arse (the question is how do you make a dino SOAR, fly)
107. 2004 (the question boxes were from The Impossible Quiz demo from 2004)
108. Type 'BANG' (if you wait until 4 seconds on the bomb a text shows up saying 'hint: create the universe') (20)
109. Titting Arsing Retarded Dicking Impossible Shit-Quiz
110. Click on the bomb. (the hieroglyphics say 'bomb') (10)
111. G (G-string, as in a thong)
112. Click on Badly Drawn Dog's anus (its shaped like 'X' , and X marks the spot for a treasure.) (10)
113. Herr Schnipp (HERR SCHNIPP = HAIR SNIP from a hair clipper which barbers use)
114. Click somewhere close to the yellow dot under Chris and the chair will collapse. If you try to stroke him, you'll create a time paradox and get a Game Over! This is because you are playing as Chris, and Chris is not allowed to touch his past self.(reference to question 68 from The Impossible Quiz (10)
115. Pleistocine (the Ice Age era)
116. The quiz's budget ran out (The question and answers were written on paper)
117. Adolf Titler
118. It blows your hand off (reference to Question 10 from The Impossible Quiz 2; trying to click the time scar under the text 'a penguin' will take a life away from you).
119. He doesn't have one (reference to Question 103 from the Impossible Quiz 2, with the words 'collar', 'blue' and 'green' replaced by 'anus', 'pink' and 'brown' respectively, because of the time scars).
120. Click on Nyan Shat about 30 times or until he poops out a rainbow. (10)
121. Click on the blue time scar beside the word 'end'. This will send a meteor to the prehistoric era, killing the dinosaurs. (reference to Question 66 from The Impossible Quiz; trying to click the '!' at the end of the 'question' will actually take a life away from you). (10)
122. Don't do anything. Splapp only wanted to show you a pic of some lemurs eating poop (Do not click anything that appears when you move your mouse over it). ('10')
123. Click any of the C's in the word 'Click' (C is the largest Roman numeral of the clickable options, although the question number, for example, is bigger) // FUSESTOPPER: Hidden in a bush, just above the V in 'lives'. Search for it.
124. Put your mouse outside the screen to make an elephant fall in, since elephants don't like mice (The task 'Click the Answer' and the options come from Question 4 from TIQ, while making the elephant come from above comes from Question 37 from TIQ 2. If you try to click 'The Answer', it will just take a life away from you).
125. Click on the blue time scar and then click on the monster's eyes. (You have to be quick) (12) 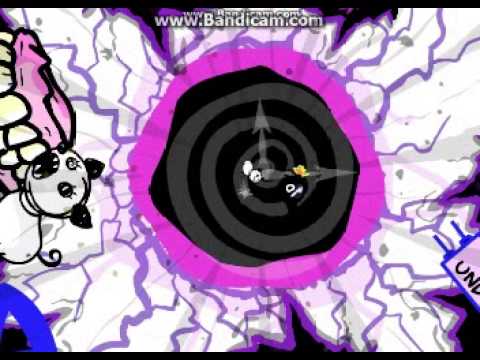 132. Australia (The question is entirely messed up) 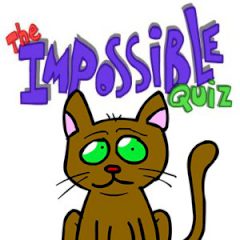 134. Gondwanaland (It is located at the bottom right one, drag the vines too see it.) (10)
135. Barbarism (Herr Schnipp was a barber)
136. Drag the vines away to find the button on the bottom of the screen, in the middle (an arrow should appear). (10)
137. A piano stuck up a tree ( A piano's keys is made from ivory, it has four legs and the tree has a trunk)
138. Rub the defective laser as fast as you can, and click on the sign when it appears (reference to Question 59 from The Impossible Quiz; charging and firin' the lazor will fire at the question number, create a black hole, and cause a Game Over!). (10) 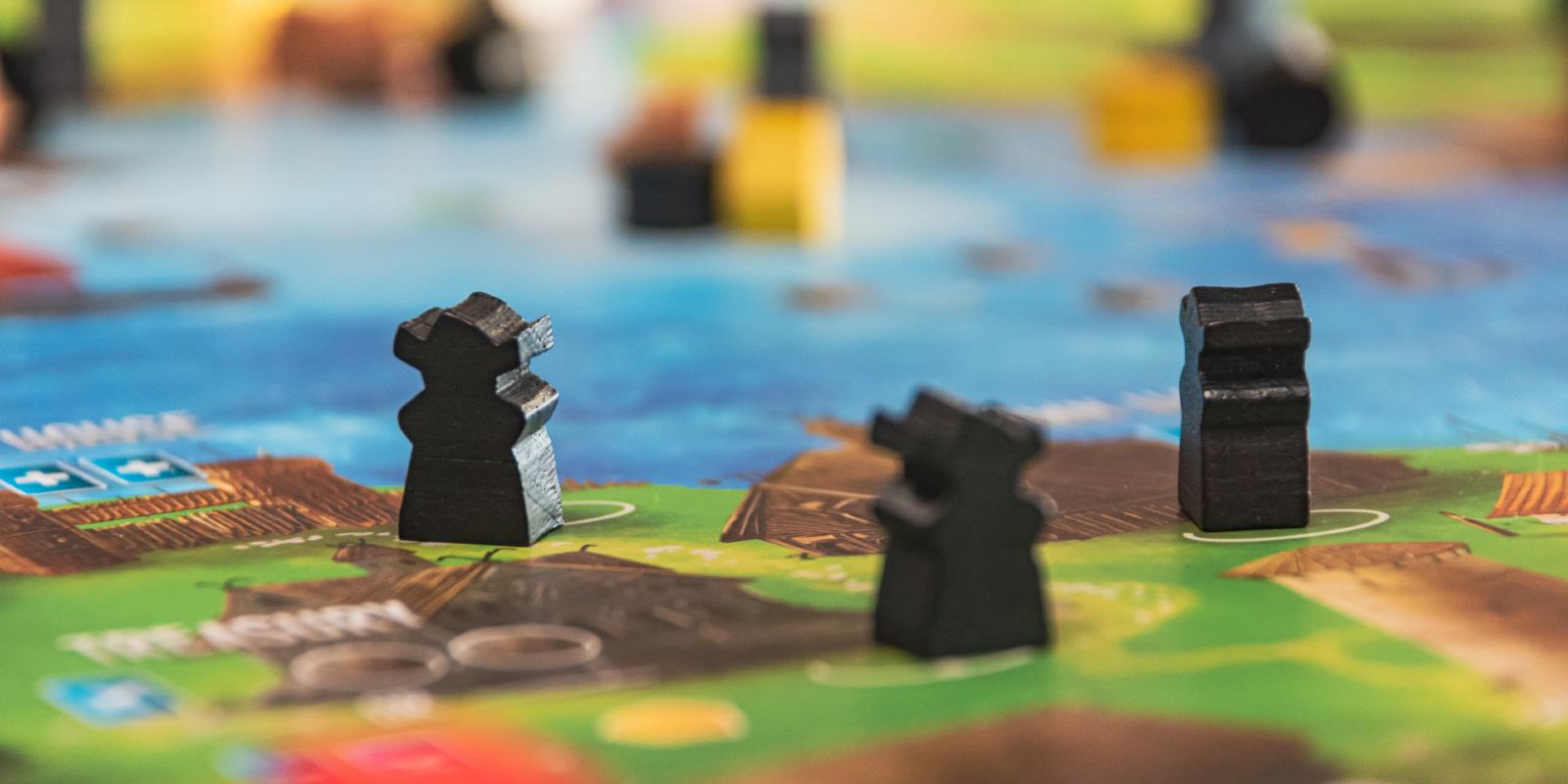 139. Bond (Bondage, get it?) // SKIP: Click the top right valve.
140. Edam. The answer is in the bottom left option box, you have to wait until it appears (reference to Question 62 from The Impossible Quiz 2, with all rotating option boxes coming from the different Impossible Quiz games in the series) (you need to time yourself carefully)

141. Click on the second portal from the right at the bottom. Alternatively, type 'cast'. (Splapp revealed that this was a leftover from question 43)
142. Click the 42nd 42. (reference to Question 42 from The Impossible Quiz, except the correct '42' is located slightly to the right, plus the '42' in the hint counts as one of the 42 42s) (10)
143. Gabe Newell (He invented the Steam Engine which is created by the gaming company called Valve) 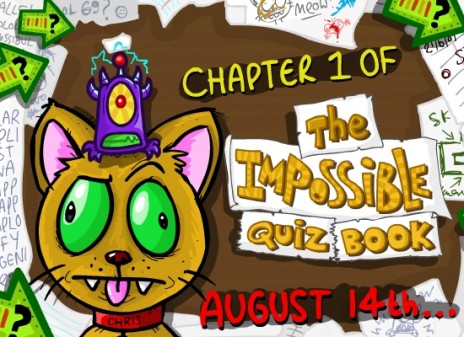 i like your games, but i wish i wouldve known it was going to show sperm. it wasnt too inapropriate, but i was showing my little brother. i told him not to ask or say anything about that because our parents wouldve gotten mad if they saw something like that in a game. before anyone says, 'why did you show your little brother a T rated game?' or something like that, the others were fine, i didnt think that would happen in this one, and i thought, 'well, its rated T, but he watched saw, a rated R film, and other movies worse than that. if this is rated T they shouldnt show anything bad. probably just crude humor, like always' that was worse though. this game will take the bad rating from one of your other games. i dont like giving many bad scores for things, so instead of two bad scores, just one really bad score and one good score. this is for the thing where you have to break sonics leg, my brothers favorite character, and the one where you pop the pimples on that ugly face in 2. it was a little too gross for me, and i eat food off the floor! the first one was your best work. it was also the most apropriate (even though you break sonics leg). Anyways, im not satisfied, and thats all.