This Tentacle Wars Android: The Ultimate Guide will go through all the aspects of the game. It will start with an overview of the game, including all the different parts. The guide will then go into tips and tricks of Tentacle Wars. This will be the last guide you will ever need for your guide on how to play and win this game! The guide says for android, but it will apply to any version of Tentacle Wars. You can download the game from the Play Store.

In Tentacle Wars, it's time to dominate the microscopic world! Just because you're simple life form doesn't mean you can't plan for world domination! Grow your tentacles and claim every other cell, spore, and organism to become the most powerful of them all! Can you survive through the multiple levels of this challenging game? Tentacle Wars Description Have been envying those octopuses for their powerful tentacles that they use to strangle their enemies? In that case Tentacle Wars lets you have tentacles of your own. The game takes you back to the Biology classes where the teacher gave you random lectures on various microbes. Tentacle Wars by lumarama - Alien microbes are ruthless predators. Your only weapon is your smarts.

This will go over the main game mechanics and all the different parts of the game. This will be a brief overview, as most of these mechanics are talked about in the games tutorials.

The overall goal of tentacle wars is is to control the whole map, making every cell green. This is accomplished by sending out tentacles to other cells, which in turn send out energy pulses to the other cell. When you overpower an enemy cell, you start off with 10 energy on your green cell. You can also cut your tentacle to send energy faster, as every little segment of the tentacle counts as an energy, and it shoots into the other cell, be it an enemy, a neutral, or a friendly cell.

The blue and red enemies from Tentacle Wars are the basic enemies. They have basic AI, and are the simple enemies to win against. They are different enemies, so they will fight each other, but their AI is exactly the same. They usually wait a little while at the start of the game to make a move, and they almost never cut off their tentacles to send a lot of energy at you or at neutral cells. They almost never feed energy into one of their own cells to boost their own power.

Purple enemies are the hard version of the enemy. They have a much advanced AI as compared to the red and blue enemies. They start almost instantly when the game starts, and they will do almost everything blue and red do not do. This includes feeding into their own cells to boost their own energy, and cutting their tentacles into your cells, or into their own cells when they get low while being attacked.

Purple enemies of Tentacle Wars are difficult to beat and win against, but that is why you are on this guide, to find the most efficient and best way to win! Keep reading for some good tips and tricks that will greatly improve your Tentacle Wars skill! 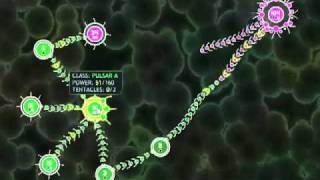 This is not explicitly said in the tutorial, but it is hinted towards. When you drag a tentacle towards another cell, you can tell if it will reach or not. This is shown in the image above, inside the red circle. The tentacle is being dragged from the right most cell into the one that is circled. The circled cell has four yellow arrows pointing into in. This means that the tentacle will reach! 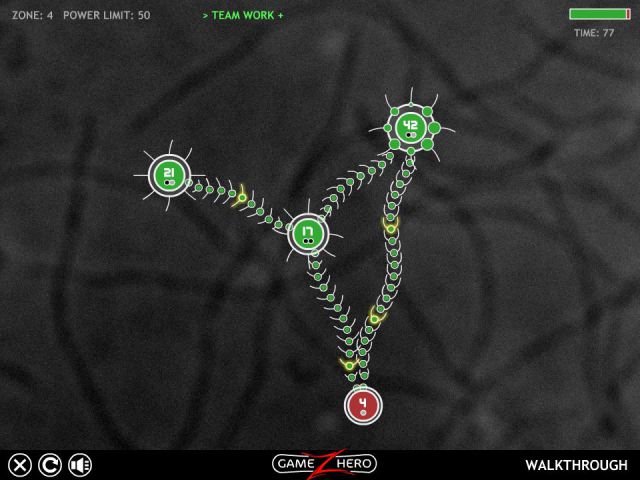 When the cell that has the tentacle being dragged into it has four grey arrows instead of yellow arrows, that means the tentacles will not reach as that moment. This can also be seen in the middle of the image above, with the little dots drawing a line between cells. Each dot represents an energy, and the yellow ones are how far the cell and its current energy would reach. The grey dots show how much more energy is needed to reach the target cell.

In the picture above, there is a triangle of green tentacles. They are pointing in a circle (triangle). This is very effective because the cells send out energy pulses in a circle, and each of the 3 cells grow. This helps each of them grow faster, as they grow on their own, and they grow when they get an energy pulse sent into them. As they grow in size, they send out energy pulses even faster through the tentacles. This loop, once each cell has reached its power limit, can completely fill up with energy, so every tentacle segment has energy in it!

If you can get at least one infinite loop in every game level, it will be a great help and greatly improve your chances of winning.

Sending Energy Into Your [Full] Cells

When you send energy pulses into a full cell, it instantly transfers that energy into its tentacles, so there can be more than a simple pulse sent out. If you have enough energy flowing into a full ell, there can be a constant flow coming out from that cell. This helps keep the cell at the biggest size it can be, so it sends out energy pulses faster anyways, and also can help overpower any other cell that you are trying to take.

Each cell sends out a constant pulse of energy through each tentacle which is attached to a different cell. This pulse speed is determined by what size the cell is (more information about the cell size can be seen below). This energy pulse is not taken from the cell itself, and is created from thin air. This means that the more tentacles you have from each cell, the more energy you can create for your cells. It is highly recommended that you use as many tentacles as your cells allow you to, as this will allow your green cells to create as much energy as possible.

Getting the Neutral Cells

The power value is what the power or energy of the cell will be when captured. The cell shown in the image above needs 25 energy to capture it, and will start with 76 energy or power. This means you instantly gain 51 energy or power when you capture this neutral cell. You create free energy very easily, and you gain another green cell. This is why it is highly recommended to get these neutral cells as quick as you can in the beginning of each game. This will greatly increase your chances of winning.

The bigger size the cell is, the faster is sends out energy pulses through its tentacles. This means you want your cells to be as big as possible. This is what many of the other tips are about, growing your cells as fast as you can, and keeping them at the power limit. The infinite loop is to keep this true, as well as sending energy into full cells, and the more tentacles the better.

The bigger size your cell is, the faster it sends energy out through its tentacles. This means you want your cells as big as the level lets them be.